When I was first elected to the Texas Senate, Lieutenant Governor Bob Bullock appointed me vice chair of the Health and Human Services Committee. Back then, health care was considered a “women’s issue.”

I never liked that term because, in my mind, all issues are women’s issues. We care about the same issues as men. But health care is of particular interest to women. Our bodies are different than men’s, and so are our health care needs.

In this new role, it didn’t take long to recognize that our policies were behind the times when it came to meeting the needs of women. The Women’s Health Program didn’t exist. There was little in the way of education about the unique health care risks for women. Medicaid didn’t cover early treatment for breast and cervical cancer.

Over the years, we changed all that. We expanded treatment options for low- income women battling cancer. We made sure mammograms were safe for women. We invested in prevention of breast and cervical cancer.

In 2005, we created the Women’s Health Program, providing screenings, wellness checks and family planning services beyond the traditional Medicaid population. Today there are four main programs specifically tailored to women. They are expected to reach more than 400,000 women and have a combined budget of over $240 million.

Women’s health has advanced under Republican leadership. Sadly, our progress is being undermined by those trying to manufacture a so-called “War on Women” -- a purely political campaign designed to paint Republicans as anti-women.

They claim funding, which was reduced during the recession, has not been restored. That is not correct. Not only did we restore funds, we increased them to an all-time high.

They claim the funds approved last session will not enhance family planning. Untrue. We required that approximately two-thirds of the women served through these new resources will receive contraception and other family planning services.

They claim that excluding abortion providers and their affiliates continues to diminish our provider network. Not so. Over 3,000 providers are signed up for the Women’s Health Program – more than double the number participating in 2011.

These claims are irresponsible, politically motivated and hinder our ability to enroll women in these programs. No one should be discouraged from receiving the health care they need because of this misinformation. The services are there. The funding is there.

We recognize there is more work to do. At our recent hearings, we identified four areas of focus to enhance women’s health: improve education, make it easier to navigate the system, expand our reach in underserved areas and strengthen family planning.

We will work across the aisle on areas of common ground – without abandoning our principles. We budget within our means. We don’t agree that embracing Obamacare is the right way to expand women’s health. We oppose using public funds to pay for abortions. These positions are often twisted to mean things they don’t, but the truth is these views are held by most Texans.

Since I became the 10th woman ever elected to the Texas Senate, women’s health has come a long way, and there are more women making decisions about our health care policies than ever before. Seven women now serve in the Senate. Three of us served on the four- person panel that wrote the Senate’s health and human services budget last session.

That budget, championed by Republicans, included a historic commitment to women’s health. Not only does my party care deeply about the rights, respect and needs of Texas women, Republicans have delivered results for women since becoming the majority party.

Women can’t be defined by a narrow list of political wedge issues. We can be anything we want, including proud Red State women who are fighting for women’s health. 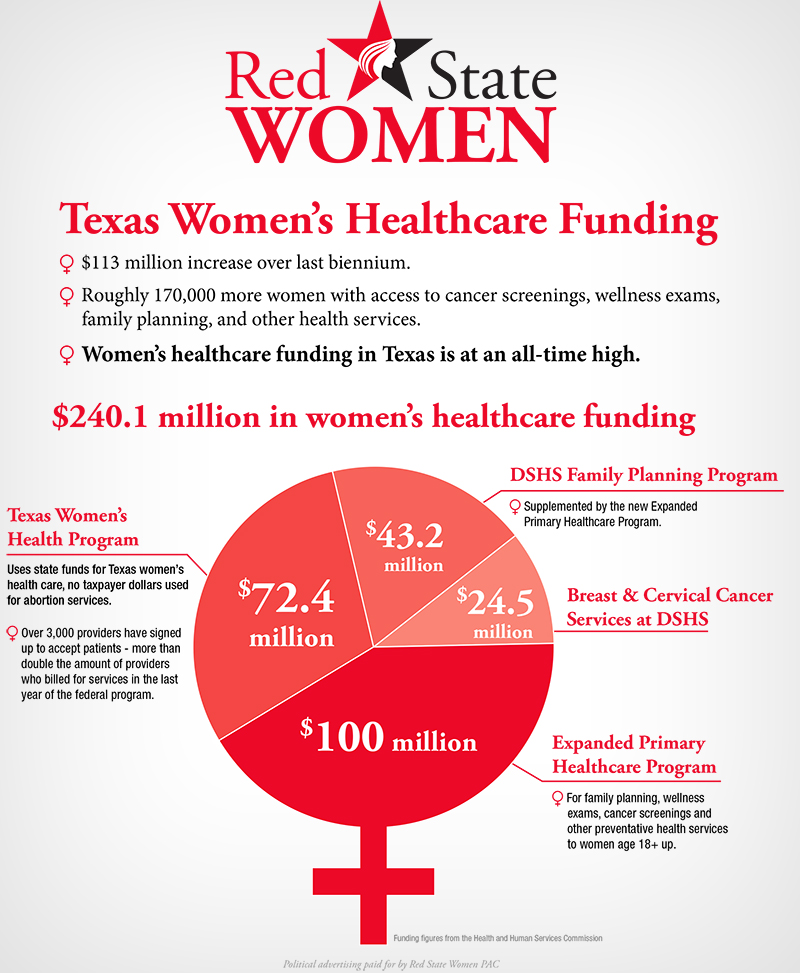 Red State Women is committed to Engaging, Empowering, and Inspiring all Texas women to become proud, politically active members of the Republican Party.